Despite hopes that a peak of the coronavirus cases is near, the pandemic continues to impact almost every aspect of daily life, becoming a rolling news ticker in itself. When such a disaster strikes, it can be easy to go through each day devouring the latest news as it occurs and digesting each piece as a story by itself without forming an overall picture.

This pandemic is a seismic event with far-reaching impacts across different sectors, and crypto is no exception. In fact, because cryptocurrency markets move at breakneck speeds, the fact that coronavirus has been making its presence felt for several weeks now means that some macro trends are already emerging. These trends are felt by the multitude of companies and operators in the crypto space, which are having to adapt while the situation is still evolving.

The dramatic drop in the Bitcoin (BTC) price in mid-March doesn’t appear to have dampened the crypto community’s desire to trade. As prices steadily rose up to the beginning of March, 24-hour trading volumes were higher on average than at any time in Bitcoin’s history. In January, the token’s daily trading volume was around $20 billion, up $5 billion from three months earlier, according to data.

However, since Bitcoin took a nosedive on March 12, its daily trading volume has barely dipped below $30 billion. A similar pattern can be seen with the Tether (USDT) stablecoin, which now exceeds BTC by trading volume. Although the pattern hasn’t replicated across other major altcoins, exchange operators seem to concur that demand is currently high despite the pandemic panic having pushed prices down. Jay Hao, CEO of OKEx, told Cointelegraph:

“We have always been closely monitoring the trading performance since the virus outbreak started in January. Interestingly, we have noticed a boost of almost 20% in trading volume across OKEx in general, although there is no specific pattern. Given that OKEx has seen steady growth in the number of users, we believe the increase is due not only to the coronavirus pandemic, but also the recent slump in Bitcoin.”

“The drop in equity and crypto markets in recent weeks have pushed crypto onramp volumes up, as we have seen retail investors ‘buy the dip.’ We have noticed a high growth rate in stablecoins onramp during this period, especially USDT and BUSD.”

Aside from the spike in trading volume around the crash on March 12, the derivatives market didn’t appear to be showing the same patterns as the BTC spot market. Rather, what is evident is that open interest had been steadily rising for the months leading up to the crash. Since then, it hasn’t recovered to anything near its pre-crash levels. 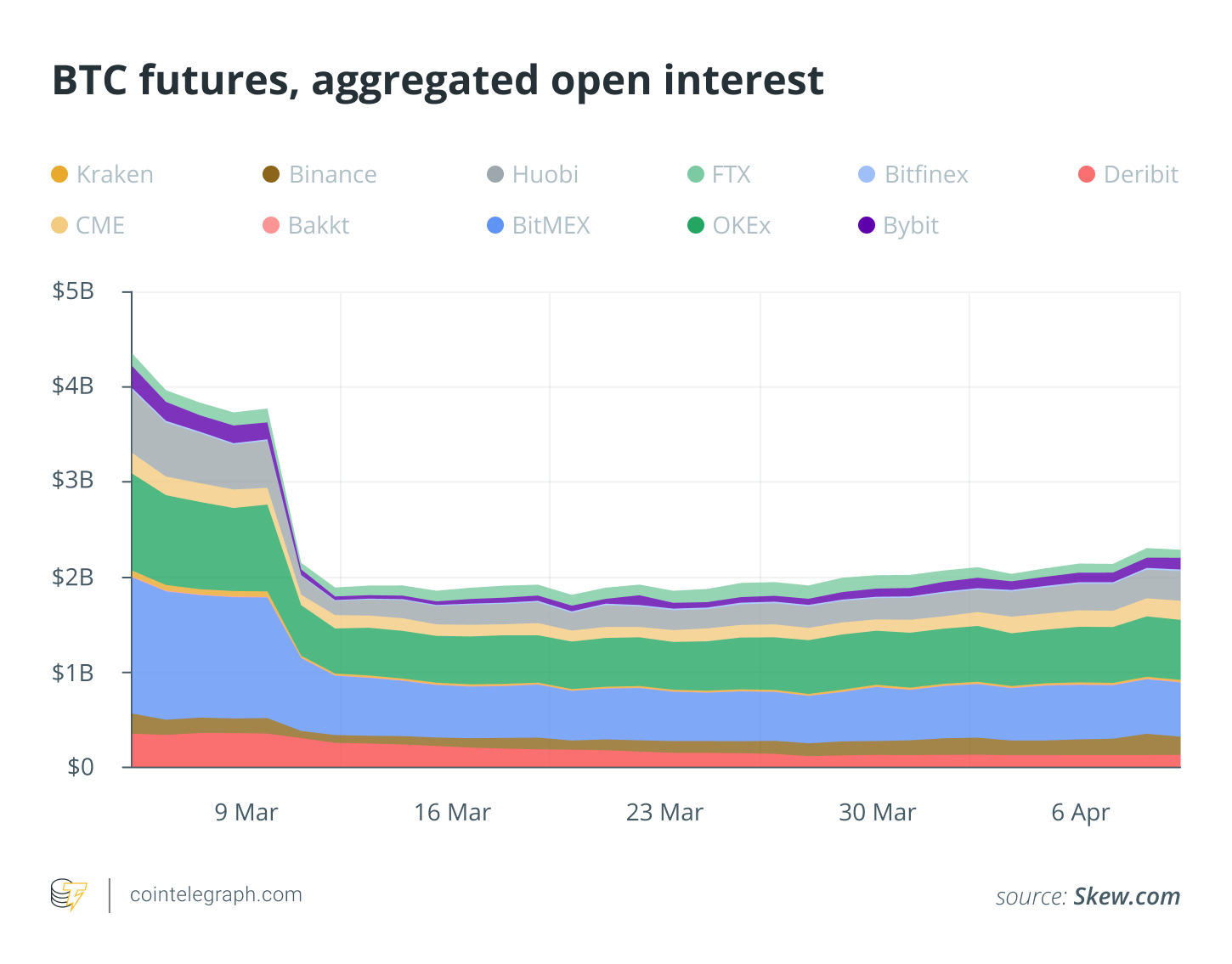 However, when examining both volume and open interest on the individual exchange level, some intriguing trends emerge. One is that BitMEX has been seeing noticeably lower volume since the March crash, while others such as FTX, Bybit and Binance are now trading bigger volumes than before the crash.

Similarly to open interest, BitMEX is seeing a far slower rate of recovery to pre-crash levels than its smaller competitors, FTX and Bybit. This perhaps implies that traders are looking elsewhere after BitMEX’s auto-liquidation engine wiped out over $1 billion worth of positions over the crash’s two-day timespan.

Ben Zhou, CEO of Bybit, is more circumspect, attributing his exchange’s growth to market volatility and traders having more free time. Speaking to Cointelegraph, he said, “It seems that there are more short-term scalper types of trading going on more than usual at this time.” He added:

“There has been a significant increase in the trading volumes, especially considering people have been spending more time at home. Volume for most derivatives exchange typically increases with price volatility. The major price movement we observed last month explains why volume actually increased. Bitcoin is performing strongly as usual, but our perpetual contracts have also seen a spike in trading volumes.”

Both exchange executives also pointed out that the coronavirus pandemic hasn’t deterred them from being able to roll out new products over recent weeks. This indicates that the crypto industry, as a largely digital space, is resilient enough to continue developing and responding to evolving customer demands.

According to DeFi Pulse, activity in the decentralized finance space has significantly reduced throughout March, particularly after the crash, which liquidated $4 million worth of Maker loans. 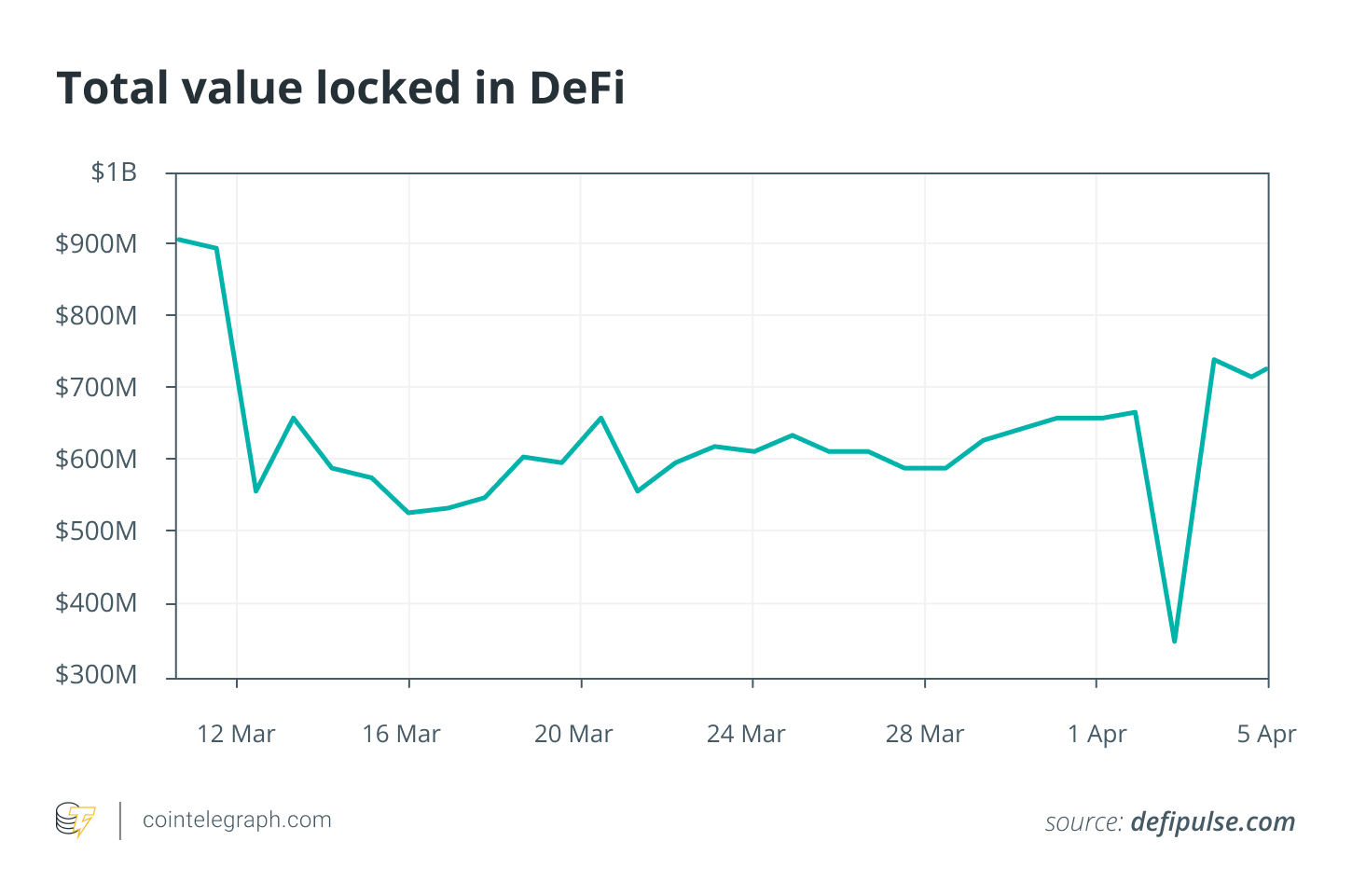 Platforms Synthetix and Compound were both seeing reduced investment from January. This could be linked to a reduced risk appetite due to the coronavirus spreading throughout Asia at the time, or it could also be down to other events such as the bZx “hack” incident reducing confidence in DeFi.

Most centralized lending apps don’t typically publish their user statistics, so discerning whether this trend extends out across other platforms poses some difficulty. However, according to Bill Dashdorj, CEO of lending app Pokket, the opposite is true. Pokket operates an interest rate model that increases during periods of volatility, which reached as high as 250% at one point, according to Dashdorj. He told Cointelegraph that, “As the start of April, compared to the period before the outbreak, the amount of users on the platform has quadrupled, and the new deposit amount has more than doubled.”

“The main change we see is speculators selling coins and going back to cash or being liquidated and HODLers buying and adding more coins. We’ve seen users withdraw from other Defi projects and deposit with Celsius as many of these projects have exhibited previously unknown vulnerabilities.”

He explained that the platform has even moved to add four more employees to the support side. So, it seems that despite the market chaos, the coronavirus pandemic could have some unanticipated positive consequences for crypto lending.

At the start of April, crypto forensics firm Chainalysis published a report stating that the recent global shocks have altered the way users spend Bitcoin. The data identified a drop in the total value of Bitcoin received by gambling sites. However, Chainalysis found a low correlation between the BTC price drop and decreased gambling expenditure.

This makes sense when considering that, at least in the sports betting space, all bets are off — quite literally. Sporting events from Wimbledon to the Olympic Games have been canceled or postponed, so it is inevitable that the gambling industry would take a hit.

Chief operating officer of crypto gambling site FortuneJack, Natia Gavardashvili, acknowledged the drop but also outlined a shift in user behavior on the platform. In a conversation with Cointelegraph, he described how players are spending far longer on single sessions. FortuneJack had actually sped up its transition to a mobile-first design in response to user demand since the pandemic began. Gavardashvili also explained:

“We have observed a gradual peak in new players who are moving to provably fair games and, most notably, Blockchain Dice. This explains the longer session times because Dice is a strategic game and depends on calculations. […] I guess in hard times, people tend to make more safe and trusted choices, even in gambling.”

There aren’t many positives to be taken away from the global coronavirus pandemic as it continues to rage across the globe. However, it is evident that crypto companies are stepping up in response to the crisis, not just to provide help with the pandemic but also cater to the needs of those stuck in isolation and quarantine. Amid heavy volatility and sharp changes to user behaviors and demand, the crypto sector is proving itself agile enough to keep pace while continuing to adapt as needed.