Morgan Stanley released a presentation on Friday giving an update on Bitcoin, cryptocurrencies, and the blockchain. The report synthesis data from various crypto focused data sources like blockchain.info, coinmarketcap.com, and bitcoinity.org with proprietary Morgan Stanley Research to develop a number of insights into the current state of the cryptocurrency landscape.

Even as prices have suffered, the scale and success of the cryptocurrency and initial coin offering (ICO) market has been breathtaking. Crowdsales have raised over USD 10 billion, between active and defunct coins, already in 2018 – and that total excludes the USD 4 billion raise by the recently launched EOS protocol. 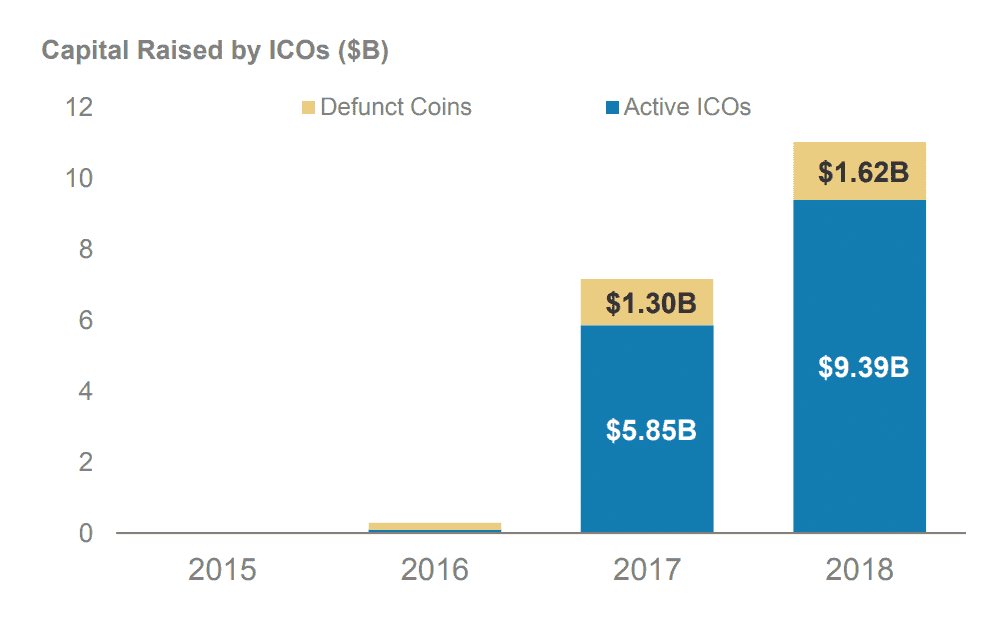 While trading volumes have fallen dramatically since December 2017, the overall cryptocurrency market has a value of over USD 300 billion, spread across more than 1,000 coins and tokens.

Even with wild swings in price, Bitcoin has not achieved the status of a truly effective payment system and will likely continue to be impeded by a few key structural issues, says the report. 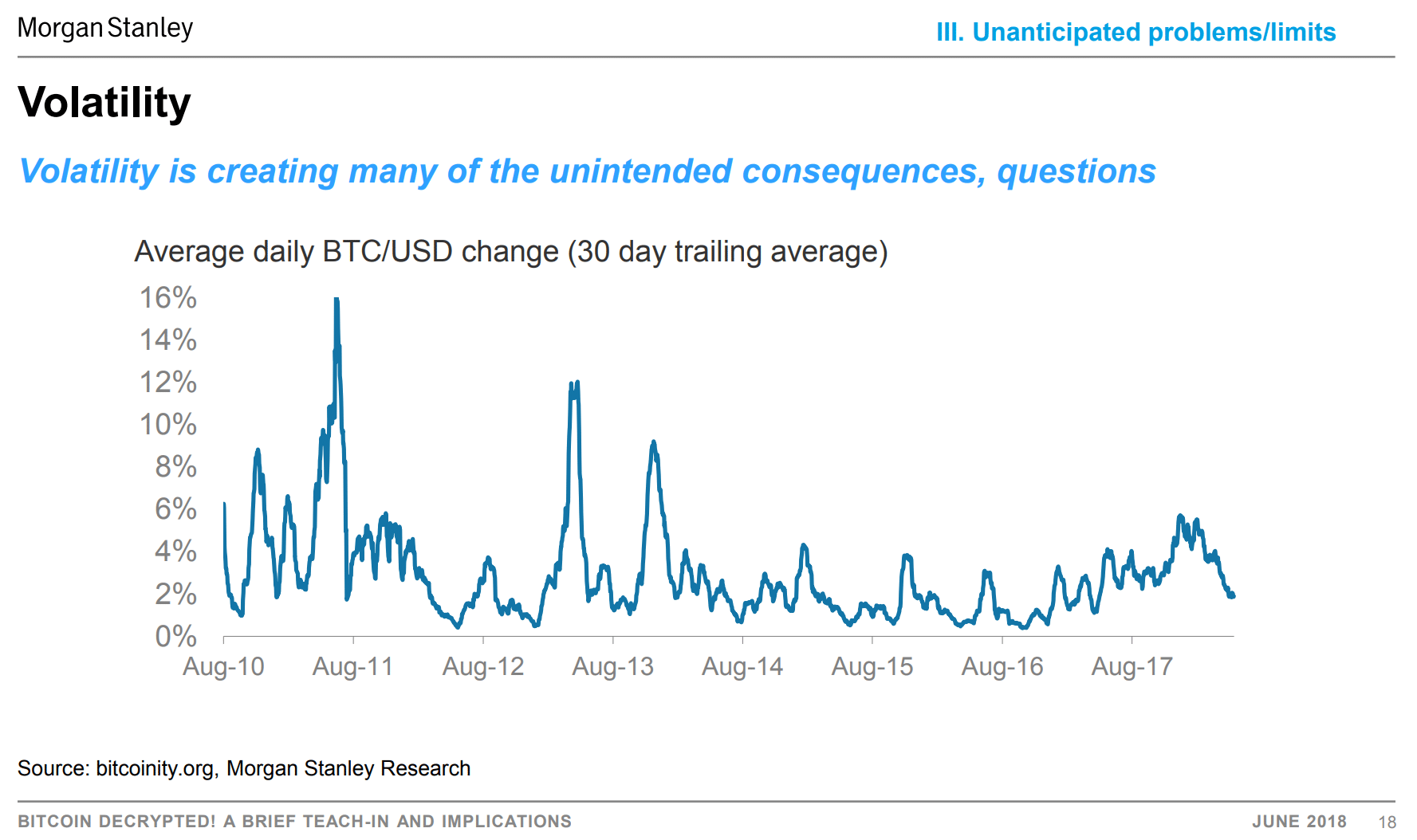 High volatility is a part of everyday life in the land of cryptocurrency, but such substantial swings make it difficult for users to be confident the value of their Bitcoin won’t double tomorrow, making them far less likely to spend it like they would a more stable currency. Technology has been advanced to facilitate retail use, of Bitcoin in particular, to address familiar issues like transaction time and fees, but the fundamental lack of enthusiasm for spending on one candy bar today what might buy two tomorrow is reflected in almost nonexistent Bitcoin acceptance among top e-commerce retailers. 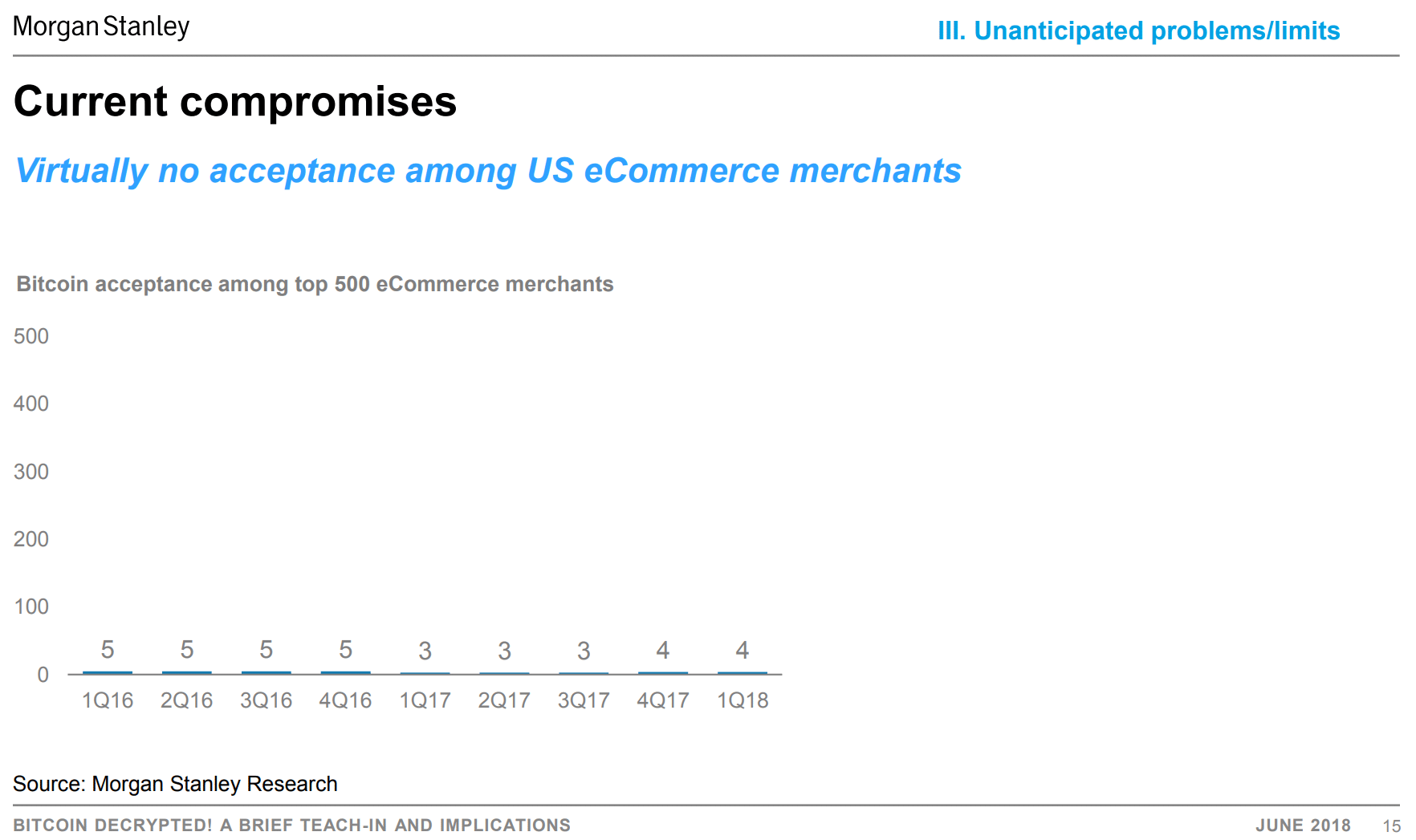 Price volatility also makes it more difficult for small-scale Bitcoin mining operations to remain profitable and in business, as extended price slumps can make fixed costs like facility rentals and cooling greater than the return from selling coins for revenue. Costs for electricity can also price out many miners who don’t have access to abundant cheap power. The convergence of all of these factors is the concentration of mining power into just a handful of mining pools, increasing the risk from bad behavior by members of the network and ultimately affecting the governance of the protocol itself. 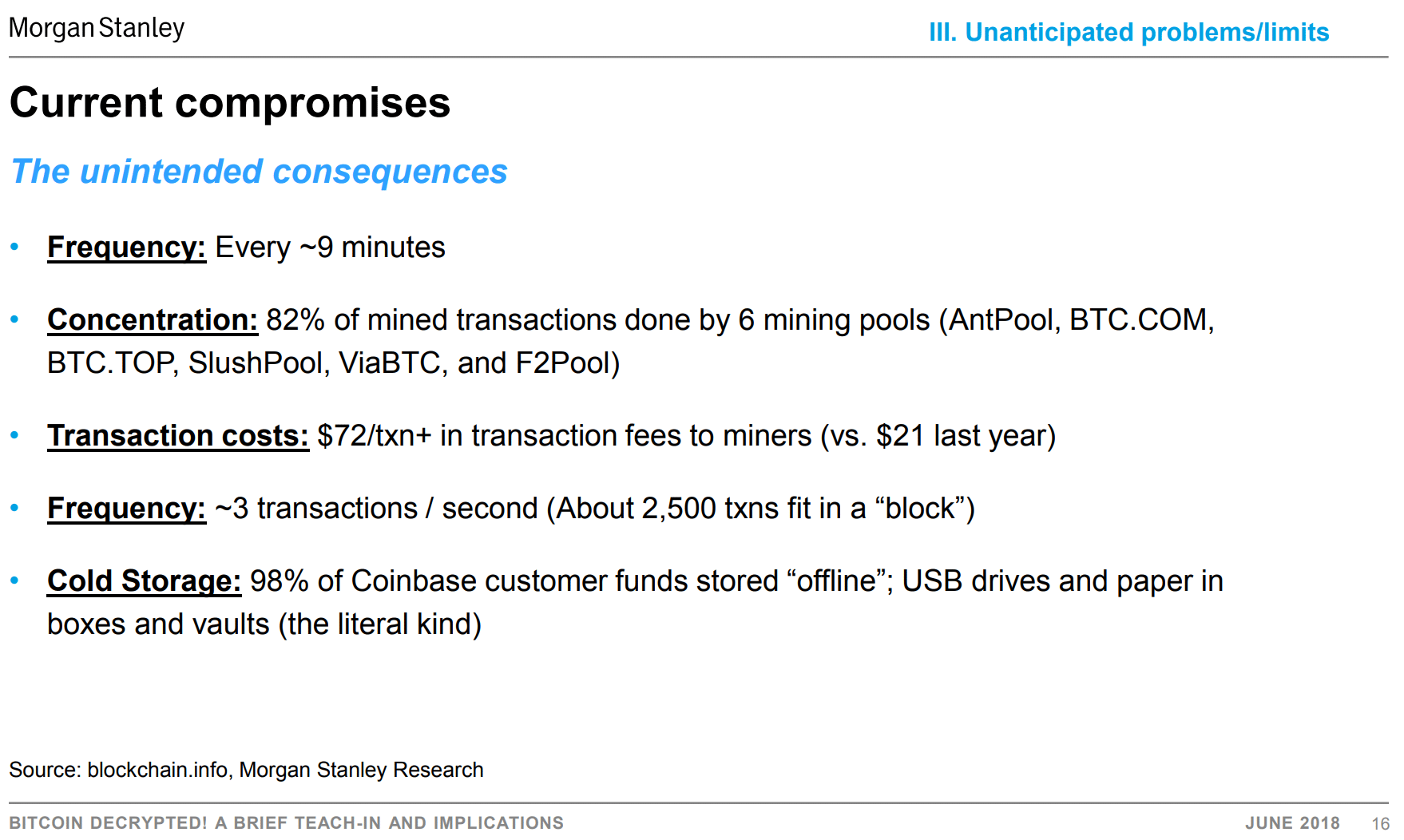 In spite of these potential issues, Bitcoin mining shows no signs of stopping and, in fact, Morgan Stanley predicts the energy costs will rise exponentially over the coming months and years, growing to account for as much electric usage as 15 million US homes. 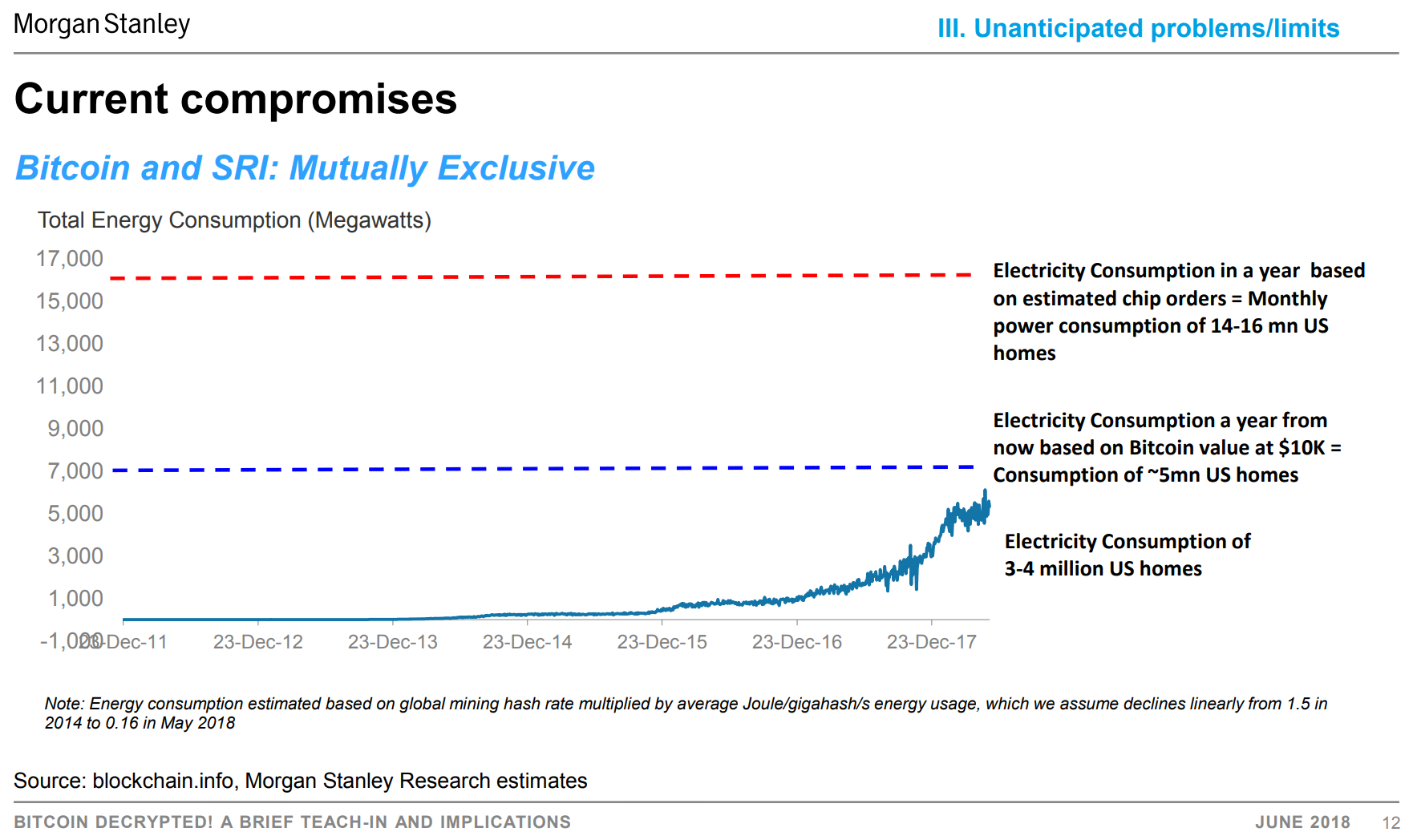 Where there’s lots of money, problems to solve, and systems to optimize, you can bet that venture capital firms and other entities related to traditional equity will continue to hunt for opportunities. Morgan Stanley research captures a blowout 2017 with the creation of over 175 cryptocurrency trading and investment funds of more than 250 total, boasting over USD 3.5 billion in AUM. 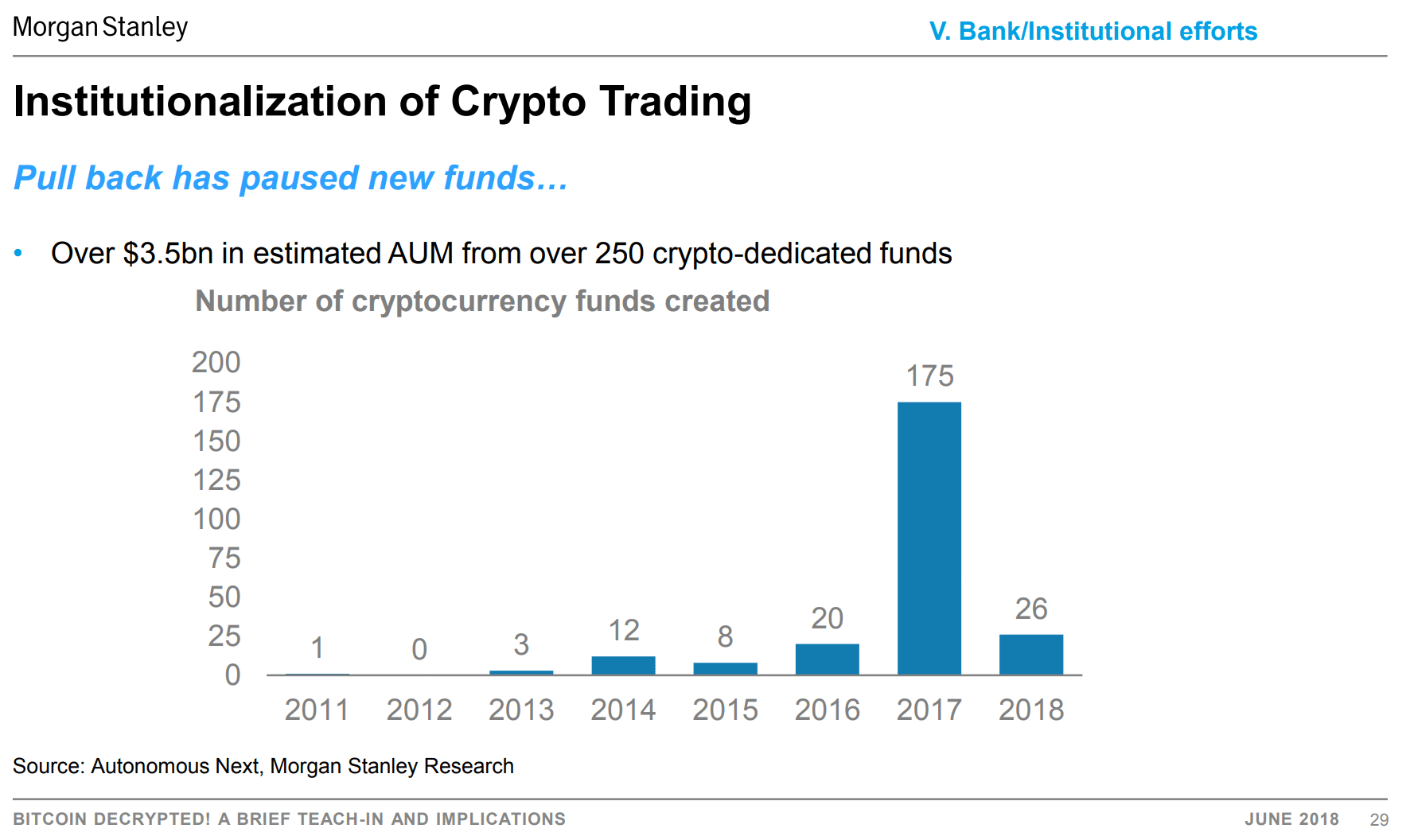 Existing banks around the world are also taking a huge interest in blockchain technology for a wide variety of use cases, with concepts and other initiatives currently in various stages of completeness. 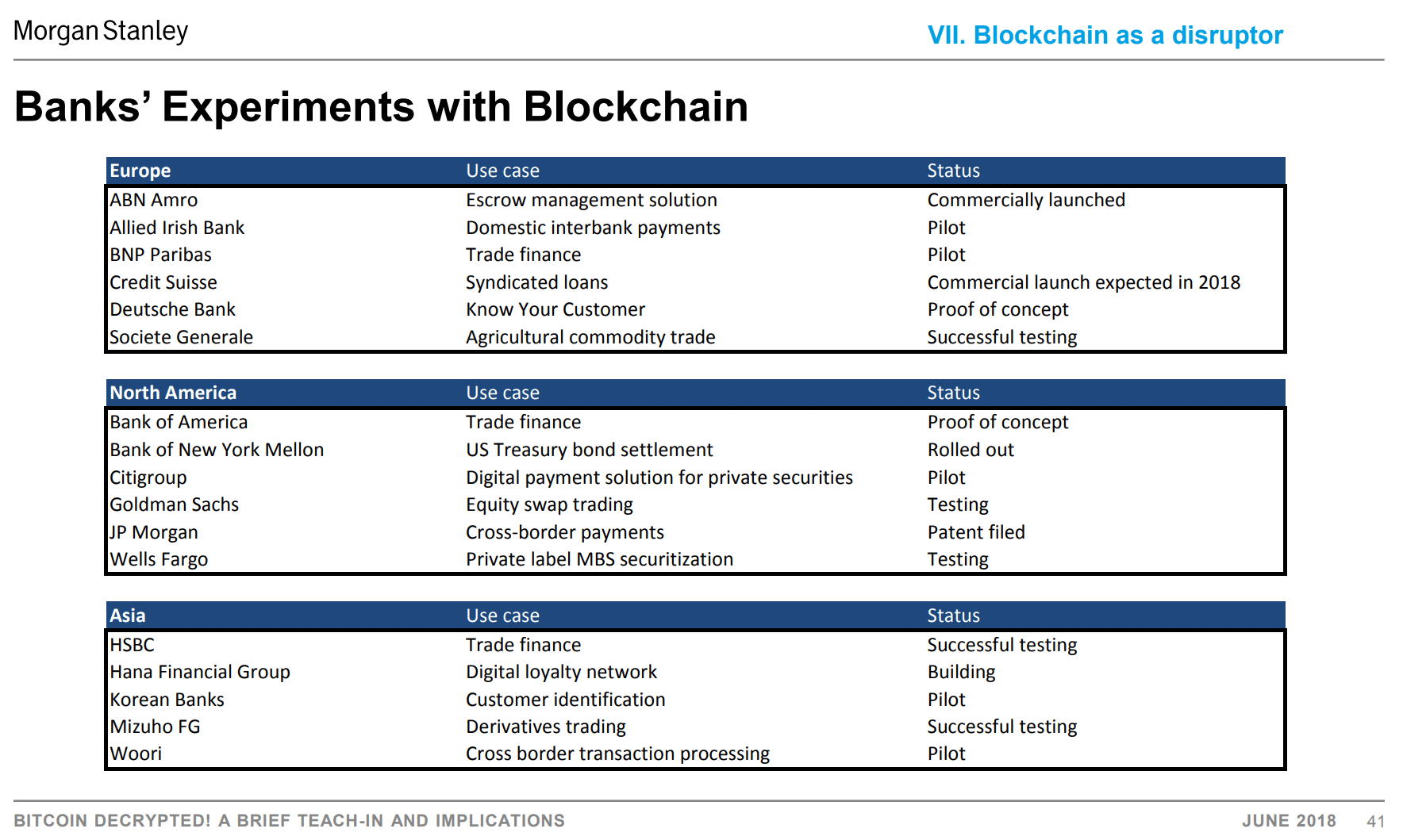 A final insight jumped out for its unique perspective – Morgan Stanley Researchers have noted that the price chart for Bitcoin since August 2016 has tracked with a high correlation to the NASDAQ composite between June 1994 and 2002. While perhaps not the most actionable information, it’s the type of insight you only get from researchers and analysts who are veterans in the field of finance and can use their prior experience to make educated choices and facilitate knowledge transfer in the closely related disciplines of crypto and finance.