Bithumb, South Korea’s largest cryptocurrency exchange, is on a mission to drastically improve the adoption of digital currencies in the country and evolve into a bank-like business to ensure its users can use cryptocurrencies with ease, like cash.

In 2018, within a four-month period, Bithumb has secured partnerships with the country’s third largest e-commerce platform, WeMakePrice, and the biggest local hotel booking platform, Yeogi Eottae. Both platforms are expected to integrate all 13 cryptocurrencies listed on the Bithumb cryptocurrency trading platform such as ICON, Bitcoin, Ethereum, Ripple, and Bitcoin Cash within the year.

In an interview with Yonhap, a mainstream media outlet in South Korea, a Bithumb spokesperson stated that the company is currently working with many of the leading companies and online businesses in South Korea apart from WeMakePrice and Yeogi Eottae to assist large-scale businesses in accepting cryptocurrencies.

“Bithumb is currently in talks with a variety of large businesses to ensure users can utilize cryptocurrencies like Bitcoin and Ethereum anywhere with ease, like in Japan.” In an interview with HanKyoReh, another major newspaper in South Korea, Bithumb said that it has partnered with WeMakePrice to eliminate intermediaries like banks and financial service providers for merchants.

“We’re integrating cryptocurrencies to eliminate intermediaries like credit card systems and allow consumers to transact directly.”
Subsequent to securing these two important partnerships, Bithumb revealed on March 10 that it has entered the cryptocurrency kiosk industry to supply fast food chains, restaurants, cafes, and malls with cryptocurrency-accepting kiosks and ATMs.

Previously, some local businesses like Coinplug, a Tim Draper-backed cryptocurrency wallet and payment processing company, attempted to popularize cryptocurrency ATMs to increase the liquidity of digital assets and ease the process of purchasing and selling cryptocurrencies for beginner users.

Coinplug withdrew its Bitcoin ATMs from two locations in Seoul due to lack of demand for the ATMs and the high cost of operating the machines. One of the two Coinplug Bitcoin ATMs was located in Cafe Sedona in Coex, the largest mall in Seoul. The cafe gained popularity amongst local cryptocurrency enthusiasts and eventually began to host Bitcoin meetups and conferences due to the presence of the Bitcoin ATM.

However, because the awareness of Bitcoin and the cryptocurrency market in general within South Korea was virtually non-existent in 2014, Coinplug moved away from directly manufacturing cryptocurrency ATMs and kiosks to helping traditional ATM manufacturers integrate cryptocurrencies. Essentially, Bithumb is attempting to revive the Bitcoin ATM and kiosk industry with its latest venture, which had failed previously due to lack of demand.

Roger Ver, an early investor in the cryptocurrency space and the CEO of Bitcoin.com, recently visited South Korea to participate in the Deconomy Blockchain conference. During his stay in Seoul, Ver demonstrated Bithumb’s cryptocurrency kiosk located at a food court that is designed to accept payments from users purchasing food with cryptocurrency. 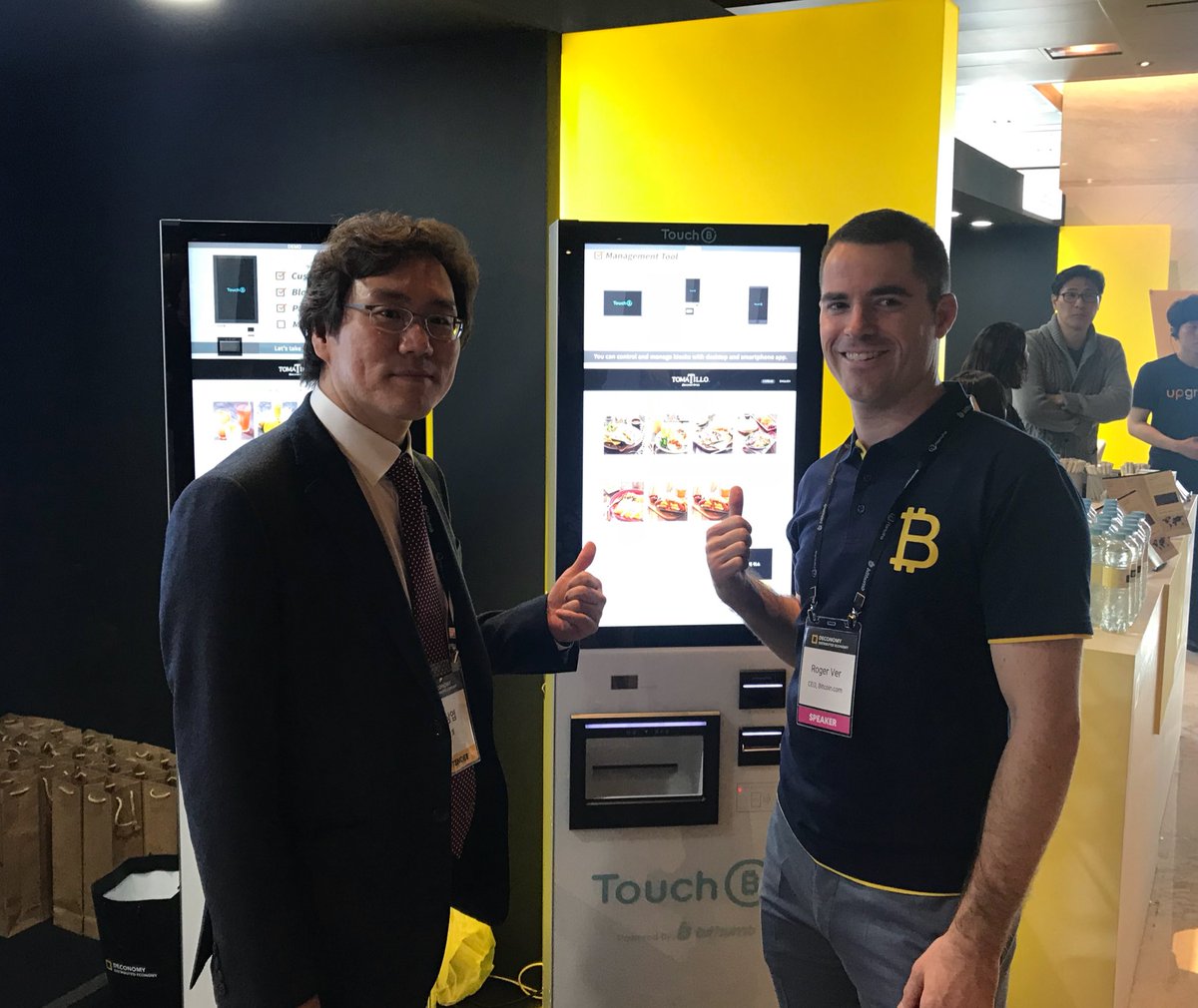 As shown above by Ver, Bithumb’s kiosks are actually actively being used by users to purchase food and other products at fast food chains and restaurants, and Bithumb plans to aggressively permeate the kiosk market to increase the adoption of cryptocurrency by casual and beginner users.

In Japan, many influential businesses like electronics retailer Bic Camera and hotel chain Capsule accept Bitcoin, and it is easy for users to use cryptocurrency to purchase food at restaurants and cafes.
In South Korea however, despite past efforts to allow underground malls and restaurants to accept cryptocurrency, the adoption of digital currencies as a payment method struggled to take off. The biggest underground mall in Seoul has been accepting Bitcoin since 2017, but when cryptocurrency users visited the site, the majority of merchants were not aware of it and did not know how to process cryptocurrency payments.

Bithumb announced that it is helping well-recognized brands like dessert cafe Sulbing and Yankee Candle to accept cryptocurrency within this year. Sulbing is a cafe in South Korea that serves Bingsu, a traditional South Korean dessert. There are 490 Sulbing retail stores throughout the country, and its brand power within the country could match that of Starbucks in the U.S.

By allowing users to carry barcodes that act as debit cards which receive payments directly from users’ cryptocurrency wallets, Bithumb is attempting to increase the adoption of cryptocurrency in South Korea by easing the process of transacting with existing digital currencies like Bitcoin and Ethereum.